Sunday in the sign of the El Camino meeting. Many visitors found their way to Meijel with their beautiful cars or just to come and have a look.

Sundays there were only ten El Camino's of the first generation to see. The square was nicely decorated with stands, an air cushion, face painting and of course live music on stage. Also Mr. John D'Agostino visited the meeting again. From the USA he takes the crystalbowl with him to hand it over to the owner of the car that Mr. John likes the most.

The organization had it all back in order and managed to create a great event. Thanks to the organization and all the volunteers who work for this event.

Watch a contribution from John Linders. 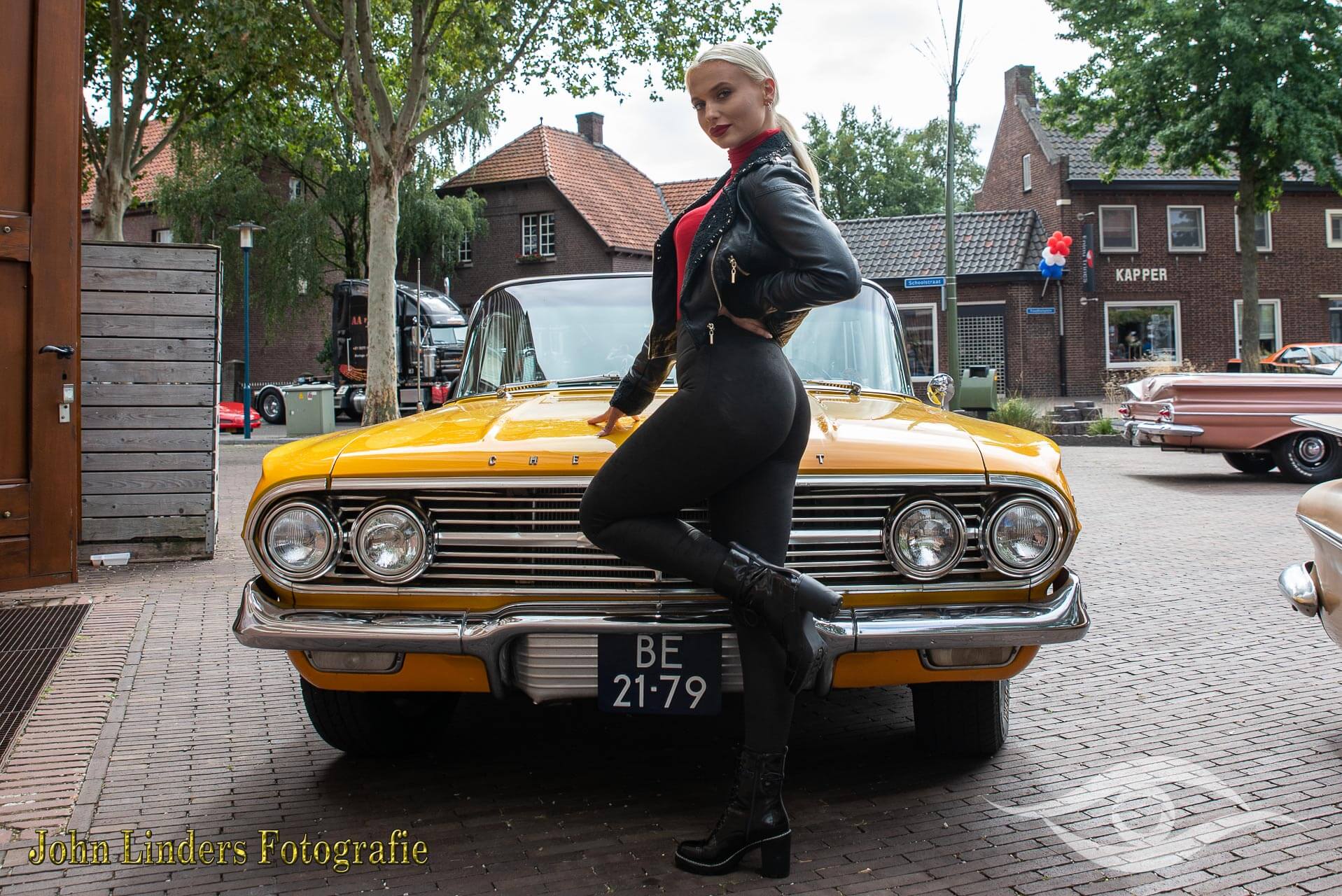 The 17th El Camino Meijel meeting was again a great success. On Saturday and Sunday no less than 92 Chevrolet El Camino's in various colors and years came to the center of Meijel. El Camino's from the Netherlands, Belgium, Germany, Norway, England and the USA. For the church on the square was a place reserved for the gems from 1959. Around the center and in the Dorpstraat were the approximately 250 USA cars of the visitors who had come in large numbers. For the second year, John D'Agostino of Celebrity Kustoms flew over from Discovery Bay California to visit this meeting. Mister John himself chose for him the most beautiful El Camino and this was rewarded with the Award of Excellence. The campaign colourful El Camino from 1959 was chosen for this.
One of the sponsors Arie-Jean vintage car restoration donated 3 cups. Cup 1 was awarded to Steve Winterol from Florida. Steve was together with his El Camino came over from the USA especially for the meeting in Meijel. The organization also handed him a pair of custom made wooden shoes. The 2nd cup was awarded to Fred Roessen from Naaldwijk. Fred is already coming for the 17th time to the El Camino meeting in Meijel. The 3rd trophy was awarded to the most extremely original El Camino from 1972 by Kristoff from Germany.
The Honorary guests from the States and some sponsors were allowed to join Maikel in the church tower to watch the meeting from above. Alwie Verstappen knew how to tell the necessary things in the church tower. 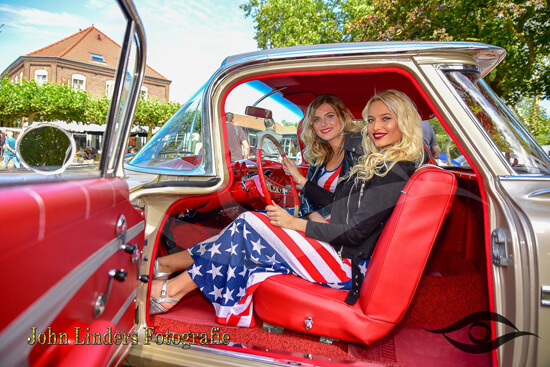 The sixteenth edition of the El Camino meeting took place in Meijel. At the show, lovers from all over Europe came to see the Chevrolets. Special guest was the American John D' Agostino who has been a well-known name in the world of customization for years. There were also several bands and there was an award for the most beautiful El Camino.

There were about eighty to ninety cars and about two thousand visitors this weekend, says organiser Maikel Joosten. According to the 37-year-old Joosten, this is mainly due to the rise of the social media in recent years, which has enabled a larger group of enthusiasts to be reached. The event attracted for example Noren, Belgians, Germans and Americans. Some visitors had to travel for a day, especially to attend the event.

To be here in Meijel is like going to heaven. In the United States you have such shows, but not as big and good as here in Meijel, says the 62-year-old special guest John D' Agostino. The American has already been present at more than 300 shows, but this year was in Meijel for the first time. So he liked that very much. D' Agostino also sold and signed T-shirts to the many enthusiastic car lovers.

Several Meijelse visitors said they were happy with the event. Unique and cozy was much mentioned. On Saturday evening there was another afterparty at café parties R Us. There were performances by the bands Chickenshit, Bongo and Expierence on Saturday and Rumble Rousers on Sunday. The organisation did not have to complain about the weather. Only Saturday morning, when the event hadn't officially started yet, there was a rainstorm.

For more than 15 years El Camino's in Meijel.

For the fifteenth time, lovers of the American car brand Chevrolet El Camino were able to indulge in Meijel. 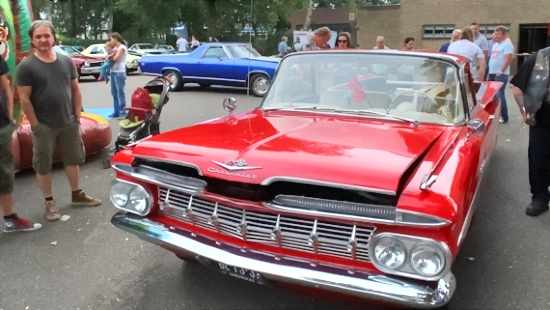 On Saturday 10 and Sunday 11 September 2016, fans from all over the Netherlands and abroad came to show their car.
The cars were set up on the Raadhuisplein square, near the church and in the car park between Oranje Hotel and Café Parties.
There were also stalls where visitors could buy models and T-shirts.
Many cars were also able to take a look underneath the bonnet, as in this red version of the car make.
The event started on Saturday afternoon and ended Sunday evening. There were several performances on the weekend, including blues band Big Ritch and the German rock and roll band Lee and the Rhythm Rockets.
Because of the good weather, many visitors came to Meijel to take a look at the American cars.

El Caminomeeting Meijel was founded by two citisens from Meijel, Maikel Joosten and Rik Martens, that were both car crazy. El Camino in particular.
Actually the idea was a joke!
There were many car show in the area, but none of the was exclusively to the Chevrolet El Camino.
The first show was held in 2002, and the founders didn't really know what they started. 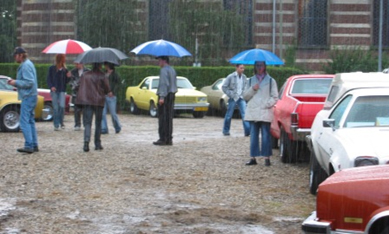 It was a big succes, even with terrible weather conditions. The First show brought 85 El camino together from 5 different countries, the Netherlands, Belgium, Germany, Luxembourg and Switserland.

The succes asked for repeatance, that resulted in an annual El Camino car show. The first twelve years were organised without any strictions, nothing official. The show became an official non-profit organisation in 2014.This was a must to do, because we wanted the show to continue for years to come and future generations to enjoy.


El Camino meeting Meijel became a World famous status through the years. The event has welcomed visitors from multiple countries like, the Netherlands, Belgium, Germany, Luxembourg, France, Switserland, England, Ireland and even the United States of America.
Copyright © 2022 www.elcaminomeetingmeijel.com. All Rights Reserved.
Back to top