The sixteenth edition of the El Camino meeting took place in Meijel. At the show, lovers from all over Europe came to see the Chevrolets. Special guest was the American John D' Agostino who has been a well-known name in the world of customization for years. There were also several bands and there was an award for the most beautiful El Camino.

There were about eighty to ninety cars and about two thousand visitors this weekend, says organiser Maikel Joosten. According to the 37-year-old Joosten, this is mainly due to the rise of the social media in recent years, which has enabled a larger group of enthusiasts to be reached. The event attracted for example Noren, Belgians, Germans and Americans. Some visitors had to travel for a day, especially to attend the event.

To be here in Meijel is like going to heaven. In the United States you have such shows, but not as big and good as here in Meijel, says the 62-year-old special guest John D' Agostino. The American has already been present at more than 300 shows, but this year was in Meijel for the first time. So he liked that very much. D' Agostino also sold and signed T-shirts to the many enthusiastic car lovers.

Several Meijelse visitors said they were happy with the event. Unique and cozy was much mentioned. On Saturday evening there was another afterparty at café parties R Us. There were performances by the bands Chickenshit, Bongo and Expierence on Saturday and Rumble Rousers on Sunday. The organisation did not have to complain about the weather. Only Saturday morning, when the event hadn't officially started yet, there was a rainstorm. 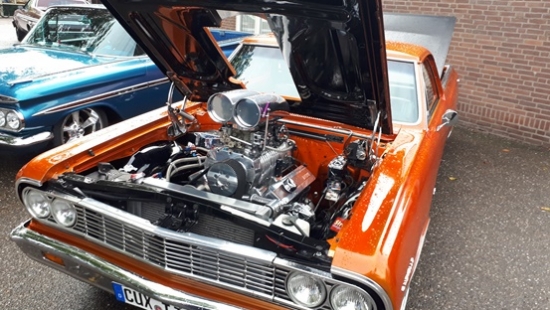 Copyright © 2021 www.elcaminomeetingmeijel.com. All Rights Reserved.
Back to top